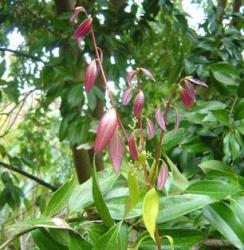 Cinnamon leaf oil has a warm, spicy musky smell and the oil’s colour varies from yellow for the leaf oil and red-brown for the bark oil, which is not usually used in aromatherapy.

Cinnamon Leaf can be used for mental fatigue and lack of concentration. This spicy essential oil has great value in aromatherapy and it fights exhaustion and a feeling of depression and weakness.

It has powerful anti-rheumatic properties, is useful in the digestive system, while fighting colds and flu as well. Cinnamon oil can be used for infection of the respiratory tract, rheumatism, arthritis and general pains.

It calms an exhausted feeling of depression, tones the whole body and stimulates the glandular system, thus easing period pains.

Cinnamon Leaf is a strong antiseptic and has a cleansing effect. It has anti-fungal, anti-viral, bactericidal, warming, stimulating, energising and uplifting properties.

Our Cinnamon leaf Essential Oil originates from Sri Lanka and is extracted by steam distillation form the leaves this yields    1.6 – 1.8 % oil

The main chemical components of the essential oil, obtained from the leaves, are eugenol, eugenol acetate, cinnamic aldehyde and benzyl benzoate

Cinnamon oil that is extracted from the leaf, is non-toxic. Caution must be exercised since the cinnamaldehyde and eugenol contained in the oil could cause irritation, especially to the mucus membranes, so this oil should be used with care.

Due to the emmenagogue action of the oil, it should be avoided in pregnancy. Cinnamon leaf Essential Oil is a mild dermal irritant and its eugenol content suggests that it may be hepatoxic and may inhibit blood clotting.

High dosages can cause convulsions, best used in lower concentrations. Cinnamon leaf Essential Oil should be avoided during pregnancy,