Cinnamomum camphora        Camphor White is useful for respiratory, muscular and immune systems: it is a balancing oil and can be used in the treatment of nervous depression as it can sedate the nerves and uplift apathy. Useful in the treatment of acne, inflammation, arthritis, muscular aches and pains, sprains, rheumatism, bronchitis, coughs, colds, fever and flue.

After distillation and rectification under vacuum it is filter pressed and 3 fractions of oil are produced known as white, yellow and brown camphor. Camphor White is the only camphor which may be used in Aromatherapy. 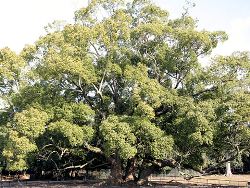 Although this oil has got some toxic effects, it can be used with great effect in vapour therapy to clear the lungs, dispel apathy and calm nervous depression. It has a beneficial effect on any psychosomatic ailments, while having some distinct benefits for the skin when used with great care.

Since this oil can be toxic, it should NOT be used in aromatherapy massage, but could be used in vapour therapy to ease respiratory problems. In some cases it can also be used in compresses.

Our Camphor Essential oil is extracted by steam from the chipped wood, root stumps and branches and is then rectified under vacuum and filter pressed. After distillation and rectification under vacuum it is filter pressed and 3 fractions of oil are produced known as white, yellow and brown camphor.

Only the white camphor oil is used and has a clear and fresh smell. The brown and yellow camphor is toxic and carcinogenic since it contains safrole and is not used in aromatherapy.

Since this oil can be toxic, it should NOT be used in aromatherapy massage

Camphor oil is a powerful oil and should be used with care. It is not really used in aromatherapy as it is classed as a convulsant and neurotoxin.

Overdosing can cause convulsions and vomiting and pregnant women as well as people suffering from epilepsy and asthma should not use it.